The Effect of Potassium Citrate on Overactive Bladder Disease: A Cross-sectional Study

Overactive bladder (OAB) is a disease manifesting urgency as the main complaint, with or without incontinence, usually accompanied by pollakiuria manifesting and nocturia, and does not have any local pathological or metabolic reason to explain these symptoms.1 OAB can occur idiopathically or due to pathologies originating from the central nervous system, peripheral nervous system or bladder. Bladder microbiome, bacterial infection, inflammation, urothelial permeability, psychological stress, anxiety, depression, some comorbidities cause excessive stimulation of peripheral afferent nerves.2 It ultimately causes urgency and pollakiuria, which are the main symptoms for OAB.

OAB is a very common disease and its prevalence in the total population in the USA has been found to be 23.3%.3 It is mostly seen in older ages, which is an important public health problem.4 The initial treatment of OAB is behavioural and pharmacological therapy. Pharmacologically, antimuscarinics and beta-3 agonists are frequently preferred medicines in the treatment of OAB. However, due to the high number of side effects, the rate of continuing treatment is very low. In one study, only a third of the patients continued the treatment in the first year of antimuscarinic treatment.5 In case of inefficacy or intolerance of the pharmacological treatment, intracavitary onabotulinum toxin injection, sacral neuromodulation, percutaneous tibial nerve stimulation, augmentation cystoplasty, and urinary diversion are other treatment options that can be applied.6 None of these treatments are perfect, and each of them has advantages and disadvantages. OAB is very difficult to treat because of the high side effects of standard treatments. Since there is no definitive treatment for OAB, there are new treatment searches. Forms such as OAB - version (v) 8, OAB – (questionnare) q, OAB - q short form (SF) have been defined to evaluate the severity of symptoms in patients with OAB.7 (Appendix) OAB treatment efficiency can be evaluated with OAB forms or urodynamic parameters.8

Potassium citrate is used in the treatment of kidney stones, especially uric acid stones, and in the prevention of stone recurrence.9 Potassium citrate reduces the formation of kidney stones or provides resolution of existing stones by decreasing urinary calcium excretion, increasing urinary citrate excretion and decreasing urine acidity.10,11 Potassium citrate and sodium bicarbonate are important pharmacological agents that increase urine pH.12,13 Although the etiopathogenesis of OAB is not fully known, urinary alkalinisation can lead to decrease the symptoms of OAB. In a study conducted on patients diagnosed with OAB, it was observed that as urine alkalinisation increased, patients' complaints decreased.14 In the literature, potassium citrate has never been used in the treatment of OAB.

This experimental study was conducted on patients who applied to Urology Outpatient Clinics in Alanya Alaaddin Keykubat University Training, Research Hospital and Süleyman Demirel University Medical Faculty Hospital between October 2019 and July 2020. Complete urine analysis and blood urea, creatinine, sodium, potassium and chlorine levels were studied for all patients included in the study, before potassium citrate treatment. Urine culture was sent from patients with suspected urinary tract infection, and if it was positive as a result of the culture, it was accepted that they had active urinary tract infection. All patients were started potassium citrate at a dose of 10 mEq 2x2 per day. The patients were informed that this medicine was started because of kidney stones, and no information was given about its effect on lower urinary tract functions. Before starting the treatment, a form was filled in for the patients to be included in the study.

The demographic information of the patient, his / her background information, the dose of potassium citrate started, the results of the complete urine test, and the results of the Turkish version of OAB-v8 were noted on this form.15 After one month of starting potassium citrate, the same OAB-v8 form was filled again and urine analysis, blood urea, creatinine, sodium, potassium and chlorine levels were examined. During this period, questions were asked about whether a new medicine was started or whether there was an active urinary system infection. According to the OAB-v8 form score, the patients were divided into two groups with a score of  ≤11 and >11. We accepted this score as threshold value for OAB disease diagnosis due to a study conducted in Turkey, which is determined the threshold value as 11 in OAB- v8 form.15

The criteria used for inclusion of patients to the study were patients having kidney stone, urine pH ≤6.5, and an indication for starting potassium citrate therapy; who also had OAB disease symptoms. The indication for starting potassium citrate treatment was determined as patients with kidney stones or a history and urine pH level of 6.5 or lower. Urine analysis for 24-hour could not be performed from the all patients. The exclusion criteria were: patients who have been operated in the last month with the diagnosis of kidney stones, patients with stones causing obstruction in the ureter or urinary collecting system, patients with active urinary tract infections, hyperkalemia, patients receiving other treatment for OAB disease, and patients with bladder irritation or disease that can lead to a neurogenic bladder. Diabetes mellitus, medulla spinalis disease or trauma history of medulla spinalis, Alzheimer, Parkinsonism, and multiple sclerosis were considered as diseases that could cause neurogenic bladder.

Statistical measurements were made with SPSS version 22 package programme (SPSS Inc., Chicago, IL). Descriptive statistics, i.e. mean, S.D, median and (IQR: Q1-Q3) about demographic characteristics and backgrounds of the patients were given. Whether the data was normally distributed was determined by Kolmogrov-Smirnov test. Independent sample t-test was used to compare two independent groups. Paired samples t-test was used to compare the pre-treatment and post-treatment, if the data met the parametric test assumptions; and Wilcoxon test, if parametric test assumptions were not provided. In patients whose scores were grouped as ≤11 and >11 according to the OAB-v8 form score, pre-treatment and post-treatment efficacy were examined using the Mc Nemar test. The relationship between the two variables was examined using the Pearson correlation or Spearman correlation. The p-values <0.05 were regarded as statistically significant for all analysis. With a value of R between 0.21-0.50, the correlation degree was interpreted as modest degree.16

All procedures performed in studies involving human participants were in accordance with the ethical standards of the Institutional Research Committee and with the 1964 Helsinki Declaration and its later amendments or comparable ethical standards. This study was approved by Alanya Alaaddin Keykubat University Medical Ethics Committee, Turkey (10354421 - 2019/4). Informed consents were obtained from all individual participants included in the study.

At the beginning of the study, 98 patients were included to the study. There were 24 people suspected of urinary tract infection according to clinical and laboratory findings before treatment. Urine cultures were taken from all of these patient. Sixteen patients had positive urine culture and they were excluded from the study. A total of 82 people, 36 (43.9%) men and 46 (56.1%) women, participated in the study. The mean (SD) age of the patients was found to be as 50.48 ± 11.03 years. No significant change was observed in the blood creatinine, sodium, potassium and calcium values in the control performed one month later, compared to the beginning of the treatment (Table I). During the treatment process, 25 (30.5%) patients were started on other medicines simultaneously. These medicines were diclofenac, trometamol, hyoscine-N-butylbromide, paracetamol, ibuprofen, alverine citrate + simethicone.

Table I: Comparison of data before and after potassium citrate treatment. 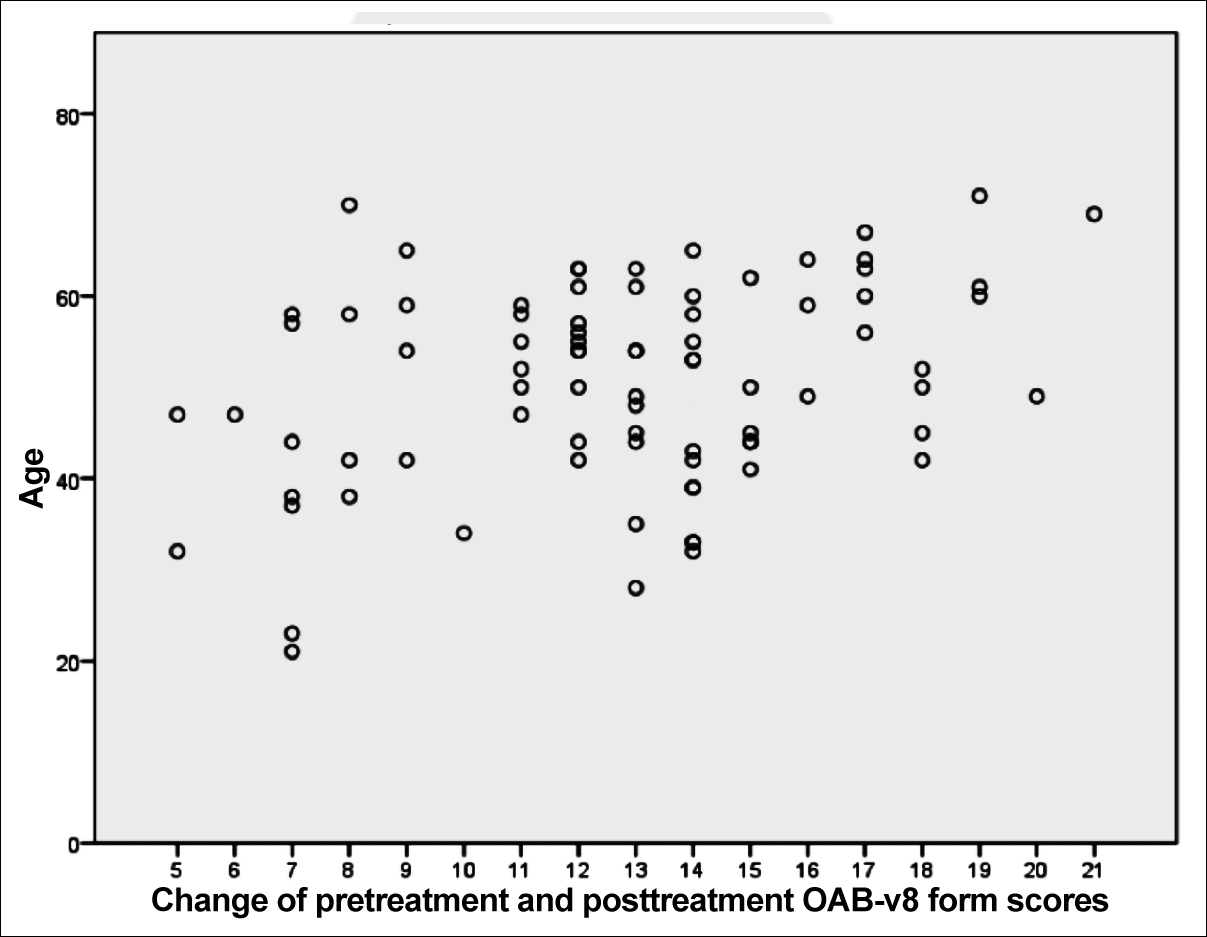 Figure 1: The relationship between age and change of OAB-v8 form scores after potassium citrate treatment.

A positive correlation was found between age and OAB-v8 score change (r=0.317, p=0.004). As the age progresses, the decrease in OAB-v8 scores in patients on potassium citrate treatment is more distinct. Potassium citrate is more effective in reducing symptoms associated with OAB in elderly patients than in younger patients (Figure 1). The differences between pre-treatment and post-treatment OAB-v8 form scores were calculated. After potassium citrate treatment, there was a significant decrease in the score of the OAB-v8 form, (p <0.001, Table I). When we grouped the patients as scores ≤11 and >11 according to the OAB-v8 form scores, the scores of all patients were >11 before treatment. After treatment, 14 (17.1%) of these patients scored ≤11 and were excluded from the OAB definition. The difference was found to be statistically significant (p <0.001).It was observed that the median of urine pH increased after the treatment. Potassium citrate treatment caused a significant increase in urine pH levels (p <0.001). However, the relationship between the amount of change in OAB-v8 scores and the amount of pH change was evaluated; and it was concluded that there was no significant relationship between them (r = 0.136, p = 0.224).

All patients had OAB disease before treatment, according to the definition of Tarcan et al. The frequency of OAB differs from society to society, but it is generally more common in women.17 In a large-scale prevalence study conducted in China, the prevalence of OAB in women and men was found to be quite close to each other.18 In this study, the number of women who participated in the study, that is, diagnosed with OAB, was more consistent with majority of the literature. Both genders responded equally or closely to potassium citrate treatment in terms of ameliorating in OAB symptoms.

The incidence of OAB increases as age and comorbidities increase.19 In a study conducted in the USA investigating the burden of OAB patients on the economy, an average of 3003 dollars per patient per month is spent for the treatment of OAB patients.20 Considering that OAB is a chronic disease, the economic burden of these patients is quite high. In our study, we observed that the rate of benefit from potassium citrate treatment increased as the age got older. Potassium citrate is a more economical agent that can be used in the treatment of OAB especially in elderly patients because it is a cheaper treatment.

After 4 weeks of sodium bicarbonate treatment, while urine pH increased from 5.31 to 7.2 on average, there was no significant change in blood pH values. In our study, a significant increase was observed in urine pH levels after potassium citrate treatment. However, there was no significant relationship between the amount of change in urine pH and the amount of change in the OAB-v8 score. Too much urine pH change does not mean that there will be more improvement in the patient's complaints and a greater decrease in OAB-v8 scores.

There are some limitations in our study. It was assumed that the agents which the patients started with other indications did not affect the bladder or voiding functions. Although these agents are not related to the bladder, they can affect urine pH and bladder functions by mechanisms we do not know. Another limitation is any fluid and dietary advice was provided to patients that might affect urinary pH. Each patient was free on his/her own fluid consumption and diet.

OAB is a chronic disease that affects a large part of the society. The treatment is lengthy and its cost is very high. Increasing the urine pH value with potassium citrate may be a part of the treatment of this disease.

ETHICAL APPROVAL:
All procedures performed in this study involving human participants were in accordance with the ethical standards of The Institutional Research Committee and with the 1964 Helsinki Declaration, and its later amendments or comparable ethical standards. This study was approved by Alanya Alaaddin Keykubat University Medical Ethics Committee, (10354421-2019/4) Turkey.

PATIENTS' CONSENT:
Informed consents were obtained from all individual participants included in the study.