Colorectal cancer is one of the most common alimentary canal malignancies worldwide.1,2 In China, colorectal cancer is the third most common cancer, with rectal cancer specifically accounting for nearly one-third of the total incidence.3 The superior mesenteric artery (SMA) and inferior mesenteric artery (IMA) are two of the three unpaired branches of the abdominal aorta.4,5 Tumours in the right colon derive blood supply from the SMA,6 while those in the left colon and rectum derive blood supply from the IMA.6,7

Thus, we speculated that the artery feeding a tumour may dilate to accommodate the increase in blood flow. Previous studies found that the diameter of the superior mesenteric vein was increased in right colon cancer, and the diameter of the inferior mesenteric vein was increased in rectal cancer.9,10 However, no assessment of the SMA and IMA diameters in colorectal cancer has been reported.

The current study recruited consecutive patients with primary colorectal cancer from Taizhou Hospital, Zhejiang University (Taizhou, China) from March 2019 to June 2020. The study was approved by the Ethics Committee of the Hospital (Number: K20200807). All patients underwent contrast-enhanced computed tomography (CT) of the abdomen and pelvis by endoscopic biopsy after confirmation of the presence of colon or rectal cancer. Patients with synchronous cancers, those who had undergone neoadjuvant treatment, those who had a history of abdominal surgery, and those with severe atherosclerosis of the abdominal aorta and its branches were excluded.

The inducted patients were divided into three groups based on the tumour location as the right colon, left colon, and rectal groups. Patients with tumours in the caecum, ascending colon, hepatic flexure, and right half of the transverse colon were included in the right colon group; patients who had tumours in the left half of the transverse colon, splenic flexure, descending colon, and sigmoid colon were included in the left colon group. Patients with rectal cancer were included in the rectal group. The control group included 40 patients with abdominal pain who had normal contrast-enhanced abdominopelvic CT findings. The clinicopathological characteristics of the patients such as age, sex, body mass index (BMI), and tumour-node-metastasis (TNM) stage (7th American Joint Committee on Cancer classification) were recorded.11

A total of 203 patients were enrolled, of whom 23 patients with stage IV cancers were diagnosed by laparoscopic exploration or CT (visibility of characteristic findings of metastasis). The remaining 180 patients without metastasis underwent surgical resection and were staged postoperatively according to the pathology observed in the resected specimen.

Table I: Comparison of clinicopathologic characteristics between right colon cancer patients and controls. 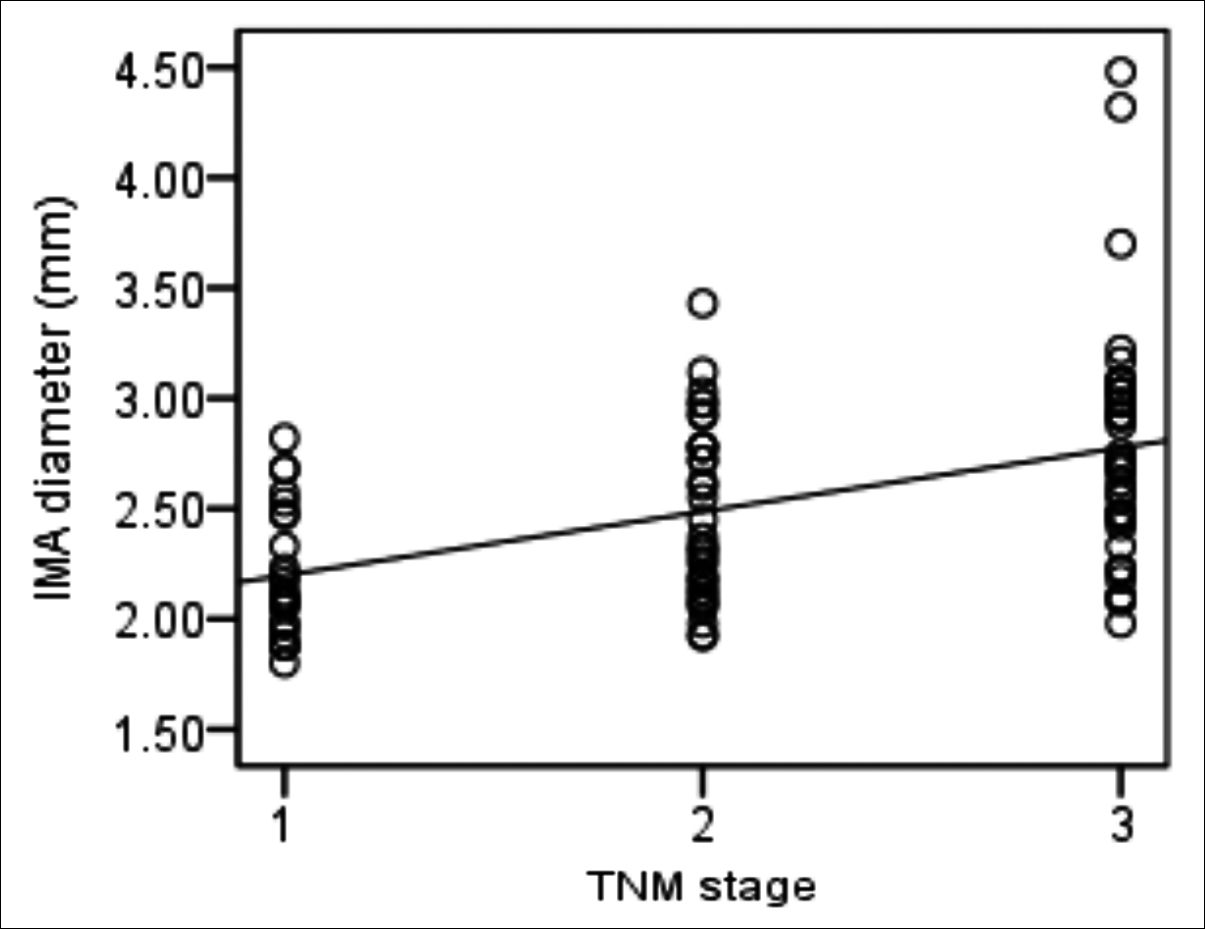 For colorectal cancer, imaging plays an important role in developing optimal treatment strategies by identifying the extent of local tumour growth and metastases.12,13 Patients with early tumours can proceed to surgery directly. However, patients with locally advanced tumours or metastasis usually require neoadjuvant chemoradiotherapy or palliative chemotherapy.14,15 Imaging modalities commonly used in the staging of colorectal cancer are CT, magnetic resonance imaging (MRI), and endoscopic ultrasonography (EUS).16,17 However, these modalities have limitations. CT exposes patients to radiation. MRI is relatively more expensive and time-consuming and is not applicable for patients with contraindications to MRI use.18 EUS is invasive, operator-dependent, and not applicable for patients with stenosis.19 Since the quality of preoperative staging could influence the treatment and prognosis of patients with colorectal cancer, there is an urgent need for new markers to increase the staging accuracy of this cancer.

Since branches of the SMA supply the the right half of the colon, the SMA diameter between patients in the right colon cancer group and those in the control group were compared. The IMA supplies the left side of the colon and rectum; hence, the authors compared the IMA diameter between left colon cancer patients and rectal cancer patients and the control group.

This study also had some limitations. First, this was a retrospective study conducted in a single centre, which might have led to selection bias. Second, the sample size was small. Third, the measurement error was also an important limitation. However, we minimised this by using two observers and considering the average of six measurements. Future, well-designed prospective studies are required to further support the findings of this study.

FUNDING:
The present study was supported by the Natural Science Foundation of Zhejiang Province (No. LGF19H160017).

PATIENTS’ CONSENT:
A waiver for informed consent was obtained from the Ethics Committees of Taizhou Hospital, Zhejiang University; and all the data from patients were analysed anonymously.