ABSTRACT
Balloon angioplasty with or without stent placement has become the mainstream treatment of Budd–Chiari syndrome (BCS). Restenosis of hepatic vein (HV) is a tough problem. The aim of this study was to perform a meta-analysis to compare the restenosis in HV involvement type BCS patients treated by balloon dilatation with versus without stent. Meta-analysis was used to calculate the combined effect size and their 95% confidence intervals (CI), based on random effect; and calculate the risk ratio (RR) and its 95% CI based on fixed effect. The publication bias was assessed by funnel plot and Begg’s test. Sixteen studies were selected for meta-analysis. One thousand and eighty-two patients (1,019 from Asian, 63 from non-Asian countries) were included. Seven hundred and five of 1,019 (69%) Asian patients received HV balloon dilatation alone. RR value (RR=0.85, 95% CI 0.68-1.08) of the two groups was obtained through meta-analysis, which meant that the risk of restenosis in balloon dilatation alone group was 15% lower than that in combined with stent placement group; although there was no significant statistical difference between two groups (p=0.178). The current meta-analysis indicated that balloon dilatation alone is first preferred approach in Asian BCS patients compared to the non-Asian patients. Balloon dilatation combined with stent placement does not reduce restenosis risk over balloon dilation alone in the treatment of BCS with HV occlusion. It is suggested that stent should be used cautiously for such patients.

In 1845, British clinician William Budd described the abnormally thickened hepatic veins (HVs) for the first time in his seminal book "On diseases of the liver", considering HV occlusion caused by HV inflammation.1 In 1899, the Austrian pathologist Hans Chiari reported 13 cases of venous endometritis at the opening of the HV, which was called HV occlusive phlebitis.2 This liver vascular disorder was called BCS.

In China, the majority of HV involvement BCS were membranous obstructive lesions, accounting for about 88-99%.3,4 Therefore, most patients could obtain good curative effect by HV recanalisation. In western countries, only 25%-41% of patients were membranous or short segment (< 4cm) lesions of proximal HV and the majority were diffuse obstructive lesions of HVs. Therefore, transjugular intrahepatic portosystemic shunt (TIPS) was often used.5,6

Scholars had different opinions on whether to implant stent after balloon dilatation.7 A recently published prospective randomised controlled study suggested that routine stent implantation could reduce the risk of restenosis in patients with BCS. However, only 11 HV type BCS patients were included in this study, and there was no comparative analysis according to the lesion types, so it is insufficient evidence in evidence-based medicine.8

Therefore, this meta-analysis was conducted to quantitatively study the restenosis rate of balloon dilatation with or without stent placement, in order to provide the basis for clinical treatment of BCS with HV occlusion.

CNKI, Wanfang, VIP, PubMed, Cochrane Library and EMBASE databases were searched from the establishment of the database to May 5, 2020. Clinical studies of HV recanalisation in patients with BCS with HV obstruction were collected. In addition, the references of the included literature were also reviewed to obtain more relevant literature as far as possible. The subject words and free words were used for retrieval. The main search terms include Budd-Chiari syndrome, hepatic vein, hepatic vein obstruction, hepatic venous outflow block, radiological intervention, recanalisation, endovascular treatment, venoplasty, balloon dilatation, balloon angioplasty, and stent.

Each searched study was separately reviewed by two researchers (two interventional radiologists with experience of 13 and 9 years, respectively) to determine if it was suitable for inclusion. The inclusion criteria were: the participants diagnosed with primary BCS with HV obstruction and treated by HV recanalisation, observational studies regardless of retrospective or prospective data, and detailed information of treatment plan, restenosis cases, etc. If studies involving the same population or from the same medical team had been published for many times, the study with the largest sample size, the longest inclusion period or the latest published study was selected; publication date, publication language, or publication status were not restricted. Exclusion criteria were: non-availability of full text of the literature, incomplete and unclear data, inconsistent outcome indicators, case reports (<10 patients), nursing related, surgical treatment, comment, review, diagnostic, dissertation, conference paper, animal studies, etc. If the two researchers did not reach an agreement about eligibility of the article, the third reviewer participated in consensus building.

Data were extracted by two reviewers independently and disagreements were adjudicated by the third interventional radiologist with experience of 30 years. Data were collected from all 16 studies regarding first author, publication year, country, demographic data (age), study duration, follow-up duration, the time of primary restenosis, study results (the number of patients who underwent HV balloon dilatation and HV stent placement, and the number of patients with primary restenosis after HV recanalization in each group).

Based on the sample size of individual studies, exact binomial confidence intervals were calculated for each study, and pooled measure was calculated as along with an equal weighted average rate (weighted by each study’s sample size) in all samples by forest plot. The I2 index were used to assess heterogeneity among studies. The ‘leave one out’ sensitive analysis was carried out using I2 >50 % and p <0.1 as the criteria to evaluate the studies with substantial impact on between-study heterogeneity. Publication bias was estimated by Begg’s test and funnel plots. All statistical analyses were performed with STATA version 15 (Stata Corporation, College Station, Texas, USA). All reported probabilities (p values) were two-sided, with p < 0.05 considered statistically significant.

Fourteen papers were analysed for this meta-analysis. Heterogeneity test (I2=0.0 % <50%, p=0.83 >0.1) suggested that there was no significant heterogeneity among the included 14 literatures. Based on the fixed effect, the RR value (RR=0.85, 95%CI 0.68-1.08, p=0.178) of the two groups was obtained (Figure 2). In conclusion, the risk of restenosis in PTBA group was 15%, lower than that in stent group, although there was no significant statistical difference between two groups.

A total of 16 studies were included in this meta-analysis, 11 from China, four from India and one from England. It indicated that the incidence rate of BCS in Asia was relatively high. In China, HV lesions were mostly membranous or short segmental obstructive lesions, so the first choice was HV recanalisation.3 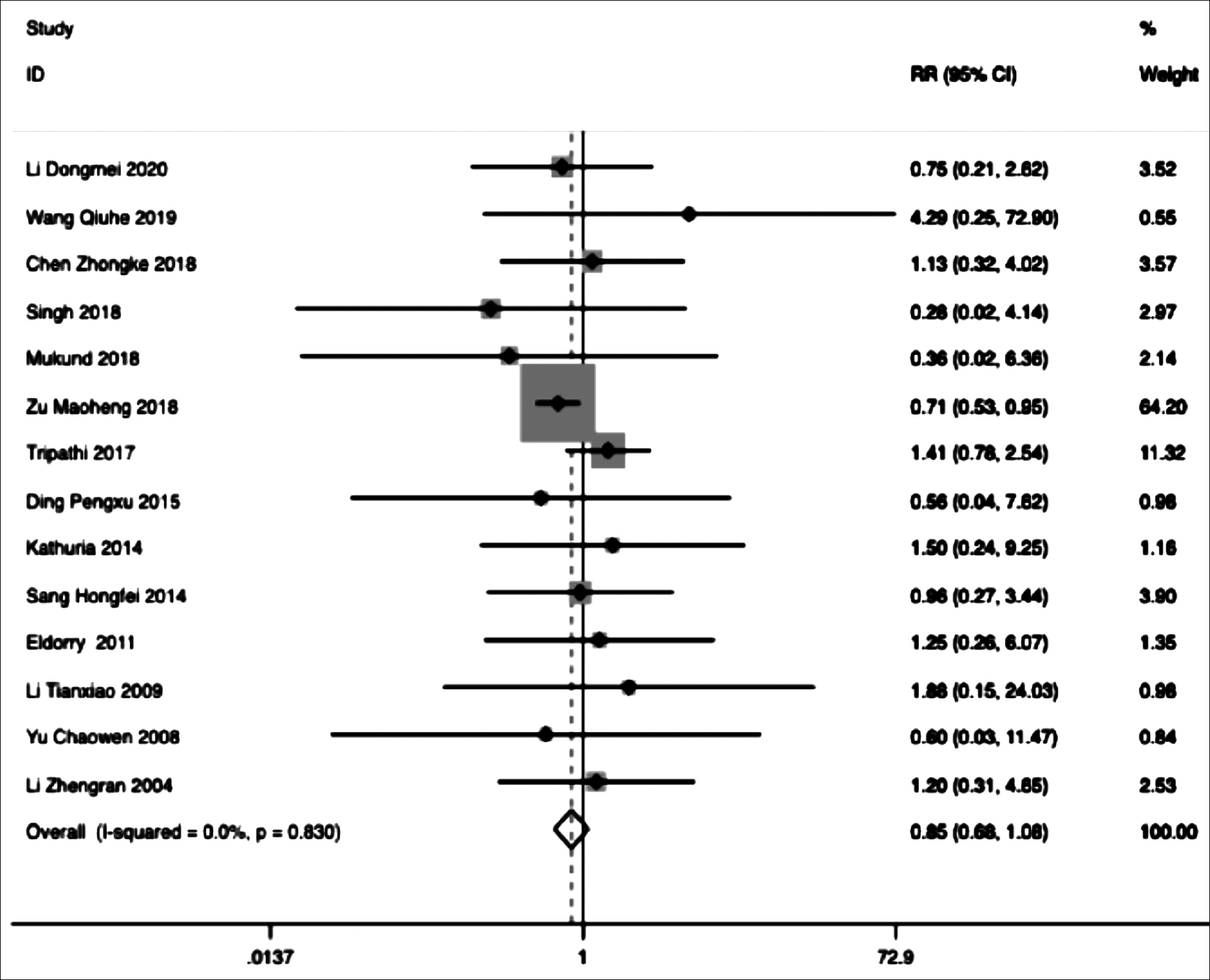 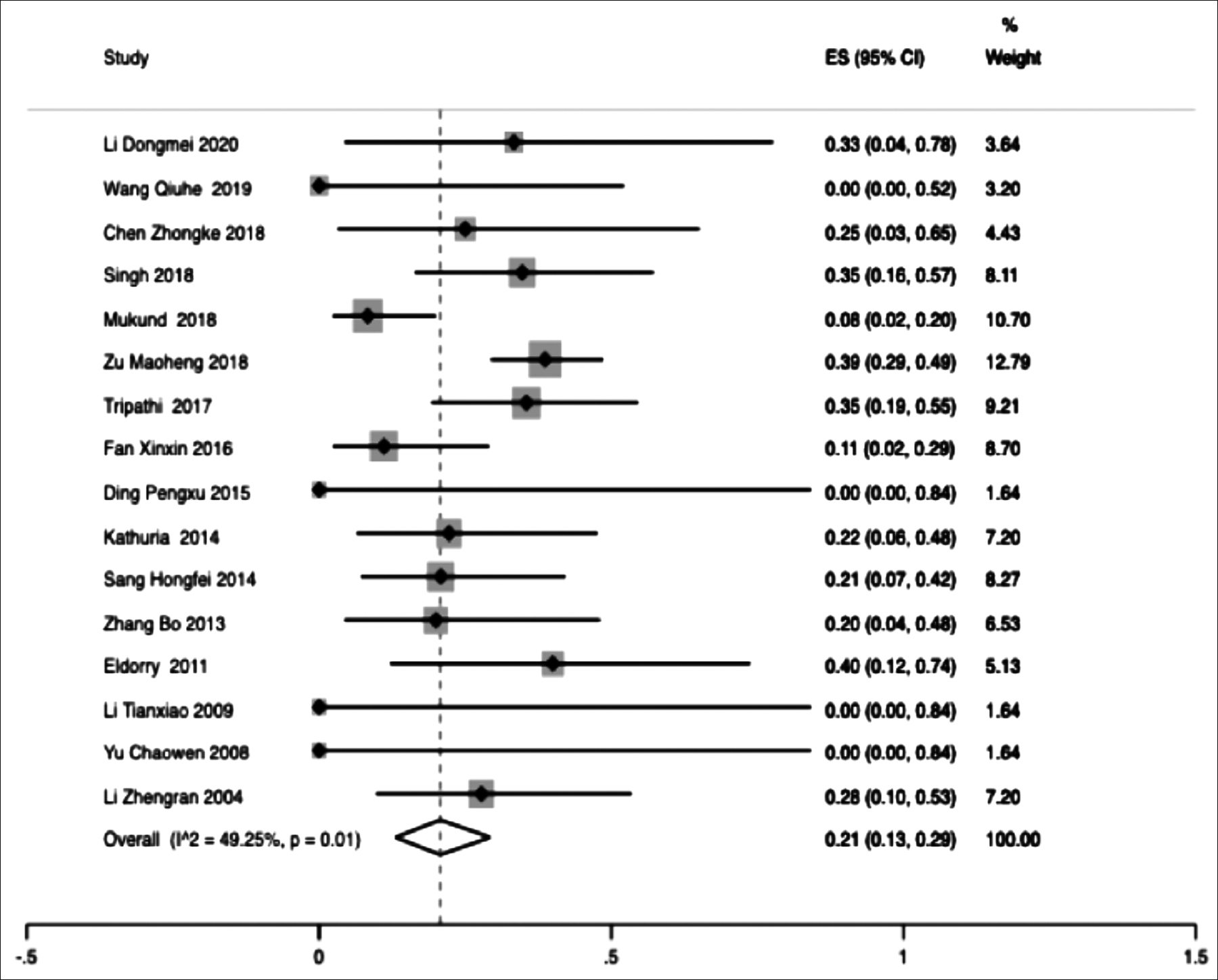 Figure 5: Funnel plot of the restenosis rate of PTBA versus stent.

When HV recanalisation was not successful or the symptoms were not relieved after venoplasty or there was irreversible severe cirrhosis with serious complications (such as repeated esophageal varices, upper gastrointestinal bleeding, intractable ascites), TIPS should be performed in time.9 However, in Europe, diffuse occlusion of HVs was common, and HV short segment obstructive lesion accounted for only 25%.5,6 Therefore, majority chose TIPS instead of HV recanalisation in Europe.10-12 A total of 1,082 patients were enrolled in this study. All patients underwent HV recanalisation due to membranous or segmental HV occlusion. Among them, 737(68%) cases (705 from Asian, 32 from non-Asian) underwent HV balloon dilatation alone, 345(32%) cases underwent balloon dilatation combined with stent implantation, which indicated that balloon dilatation alone is still the mainstream treatment for HV involvement BCS, especially in Asian countries (69%, 705/1019). Restenosis occurred in 280 cases (26%). Restenosis leads to disturbance of hepatic blood flow, degeneration and necrosis of hepatocytes around the centre of hepatic lobule, which leads to the changes of laboratory indexes such as liver function. Meanwhile, intrahepatic fibrous tissue hyperplasia, portal vein pressure increase, gastrointestinal bleeding and intractable ascites are produced. A 30-year follow-up study by Zhang et al. suggested that restenosis was an independent factor for survival of BCS patients after interventional therapy.13 Therefore, the occurrence of restenosis is the core factor affecting the survival. Timely detection of restenosis and re-intervention is the key to improve the prognosis.

The problem of restenosis after BCS intervention treatment has been plaguing clinicians. Restenosis is often accompanied by recurrence of symptoms, which means that the previous treatment failed, and patients need to undergo re-intervention or other treatments, which increases the patient's pain and financial burden. In Europe, European Association for the Study of the Liver guidelines suggested that HV stent placement can reduce restenosis,7 but there is no specific clinical data to support it. In China, interventional therapy experts generally recommend that the indication of HV stent placement is that the pressure drop of HV after balloon dilatation is not ideal, or the elastic retraction of HV lumen is more than 50%.14

This study has few limitations. Firstly, the operational proficiency and the choice of instruments influenced the treatment outcomes. Secondly, most of the literatures in this meta-analysis are single arm studies, and part of the heterogeneity comes from this. Thirdly, heterogeneity may also be due to differences in research methods, including selection bias. When the RR values between PTBA and stent group through meta-analysis were calculated, there was no heterogeneity. Heterogeneity appeared in the calculation of the combined effect of each group, but sensitivity analysis showed that none of the inclusive literatures caused great interference to the results of this meta-analysis, which means that these studies have good stability. Begg’s test for each group also found no publication bias.