ABSTRACT
The role of metallic stents in the management of refractory variceal bleeding is now well established however, they have been rarely used in the treatment of malignant gastrointestinal (GI) tract bleeding. To our knowledge, there are only three case reports in this regard, where fully covered self-expandable metallic stents (SEMS) were placed for the treatment of bleeding duodenal tumours. We have shared an experience of a novel and successful treatment of the oesophageal tumour-related bleeding with a fully covered SEMS. The 49-year male with oesophageal cancer presented with haematemesis and had received neo-adjuvant chemotherapy 3 weeks back. Upper GI endoscopy revealed an obstructing distal oesophageal tumour with the diffuse oozing of blood. While injection of adrenaline over a large ulcerated surface area was not possible, an attempt to treat it with hemospray was also unsuccessful. Thus, a temporary fully covered SEMS was inserted across the tumour to create a tamponade effect which resulted in the immediate cessation of the bleeding. This was endoscopically removed after a week and there was no further bleeding in one-month follow-up.

The management of gastrointestinal (GI) tumour-related bleeding is challenging. Various endoscopic therapeutic options to control the bleeding include thermal therapies, radiofrequency ablation, endoloops, injection therapy, and hemospray. The metallic stents are frequently used in the palliative management of GI tract tumours to relieve obstruction as well as to cover tracheoesophageal (TE) fistulas in the oesophageal cancer.1Moreover, they have an emerging role as a bridging therapy to perform surgery in gastroduodenal tumours with outlet obstruction and obstructing colorectal cancers.2,3 On the contrary, stents have rarely been used in the treatment of malignant GI tract hemorrhage although, they have been proven as safe and effective in the management of refractory variceal bleeding.4 We report the first case of oesophageal tumour-related bleeding, which was successfully managed with the placement of a fully covered self-expandable metallic stent (SEMS) across the tumour.

A 49-year male, a diagnosed case of oesophageal cancer (T3N1), presented in the emergency department with multiple episodes of haematemesis for one day. He had received three cycles of neo-adjuvant chemotherapy (carboplatin and paclitaxel) 3 weeks back. He was hemodynamically stable. His laboratory investigations showed a hemoglobin of 9 g/dl with a drop of 2 g/dl over one week. The platelet count and international normalised ratio (INR) were normal. They liver function tests were unremarkable. After resuscitation, an upper GI endoscopy was performed which showed an obstructing distal oesophageal tumour with diffuse oozing of blood from its surface. Due to the diffuse bleeding from the large ulcerated tumour surface, injection of adrenaline did not appear to be a good option, while an attempt to treat it with 2g hemospray was unsuccessful. Thermal therapies could not be used due to the stricturing tumour which limited the access to its entire bleeding surface. Therefore, a 18×130 mm temporary fully covered SEMS (HANARO STENT) was inserted across the tumour to create tamponade effect which resulted in immediate cessation of bleeding (Figure 1). A surgical opinion was requested however, the patient appeared to be medically inoperable. There was no further bleeding or hemoglobin drop during the observation for 48 hours, after which, he was discharged from the hospital. One-week following the stent insertion, a repeat endoscopy did not show any bleeding from the tumour, and therefore, the stent was removed (Figure 2). The patient was further followed up in a radiation oncology clinic after one month and he did not report any further haematemesis or melaena. He has been planned for palliative chemo-radiotherapy. 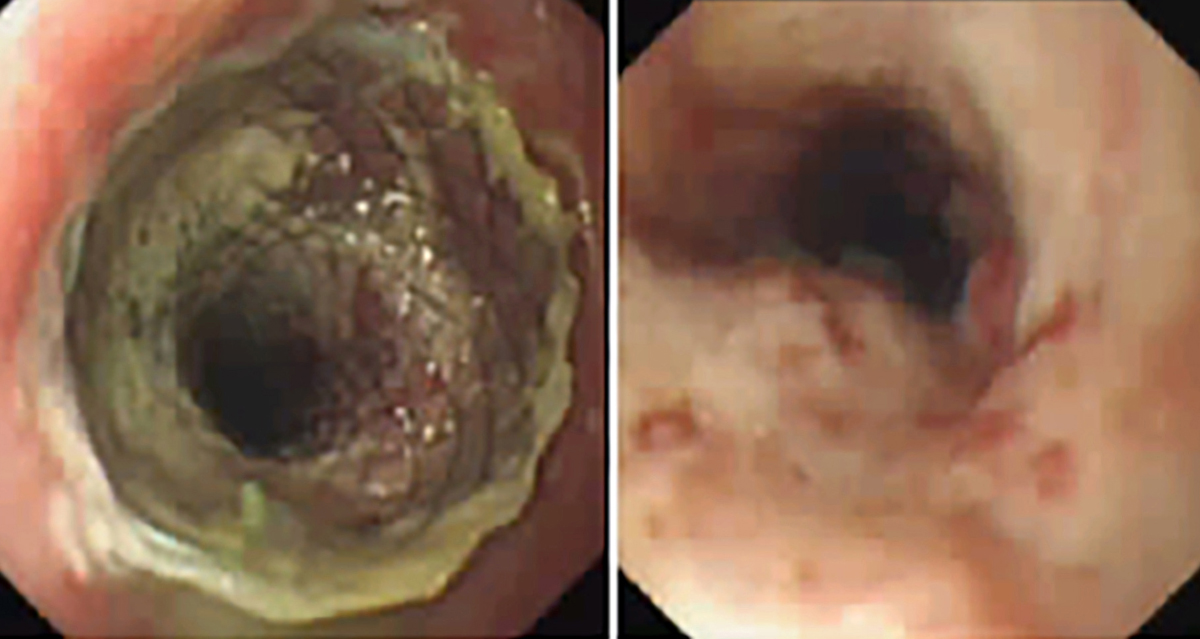 A variety of available stents for the malignant diseases include partially covered SEMSs (the proximal and distal ends of the stent are devoid of covering), fully covered SEMSs (the entire length of the stent is covered), uncovered SEMSs, and plastic stents (SEPSs). Plastic stents are rarely used nowadays due to the increased frequency of adverse events. The fully covered SEMSs and partially covered SEMSs are predominantly used in the treatment of various problems due to the malignant GI tract tumours.1 The most common indications, for the stent placement in cancer settings, have been palliative treatment of the tumour-related GI tract obstruction and covering the tracheoesophageal fistulas; however, stents are now gaining popularity beyond palliation.1 Their role as a bridge to surgery in obstructing colorectal and gastric tumours have been widely advocated.2,3 Apart from dysphagia, another challenge with upper GI tract tumours is bleeding. Tumour-related bleeding accounts for 1-5 % of upper GI tract bleeding.5 The endoscopic means of hemostasis in malignant GI tract bleeding comprise local injection of hemostatic materials, argon plasma coagulation (APC), radiofrequency ablation and recently, hemospray. In one study, haemostasis was achieved in 86% patients by using ethanol injection, epinephrine injection, bipolar electrocoagulation, or clips.5 According to another review, contact thermal therapies are effective for the short-term GI-related tumor bleeding but have high rebleeding rates.6 Hemospray was initially utilised to control bleeding from wounds by the military in the battlefield before its use as an endoscopic hemostatic agent to control non-variceal GI bleeding. It causes hemostasis by activating the platelets and the intrinsic coagulation pathway. According to the French registry of 202 patients, immediate hemostasis in the upper GI bleeding by various causes was achieved in 96.5% cases, but recurrent bleeding was noted on day 8 and day 30 in 26.7% and 33.5% cases, respectively.7 In contrast to GI tract bleeding from benign causes, the endoscopic management of malignant bleeding has not appeared promising.6 Surgical resection for cure or palliation is the treatment of choice for medically operable cases. As of now, the role of fully covered stents has only been defined in refractory variceal bleeding,4 while there are only three case reports of their use to treat bleeding duodenal tumours.8-10 In two cases, initial endoscopic treatment with APC and epinephrine failed to stop bleeding from irresectable primary duodenal tumours. A fully covered metallic stent was placed as a rescue therapy after several days to create a tamponade effect through its mesh.8,9 This resulted in the cessation of bleeding. The third case had refractory bleeding from the metastatic ulcerated duodenal lesion due to recurrent hepatocellular carcinoma, which was previously resected. After several unsuccessful endoscopic attempts to control it with a variety of modalities (injection of epinephrine, endo clips, and electrocautery), fully covered SEMS insertion resulted in the success.10 All three patients remained admitted for many days requiring multiple transfusions and repeated endoscopies till the placement of the stent. On the other hand, our patient had bleeding from oesophageal tumour and the stent was placed during the first endoscopy when hemospray did not help and epinephrine injection was not possible. There was no further bleeding and the patient was discharged within 48 hours.

In conclusion, the fully covered metallic stent may prove to be a valuable rescue therapy for the refractory malignant upper GI tract bleeding in a palliative setting.

PATIENT’S CONSENT:
Informed consent was obtained from the patient to publish the data concerning this case.

AUTHORS’ CONTRIBUTION:
MZS, MS, JI: Got IRB approval, collected the data, prepared the manuscript which was finally reviewed, critically analysed, and corrected by MAY.
MAY: Performed the procedure and gave the idea to report the case.
All the authors have approved the final version to be published.