Surgical clipping is a traditional method to repair aneurysmal dilation, introduced by Walter Dandy of Johns Hopkins Hospital in 1937.1, 2 With advancement of endovascular techniques, endovascular management of ruptured intracranial aneurysms is considered a valid alternative to microsurgical clipping.3 The international subarachnoid aneurysm trial (ISAT) demonstrated the superiority of endovascular therapy.4 However, ISAT conclusion was criticised by many clinicians, and not well accepted by subsequent studies.5,6 Not all aneurysms are suitable for endovascular therapy. For tiny aneurysms (≤3 mm in maxium diameter), due to the characteristics of the small cavity and thin wall in which the microcatheter has to be placed, high tumor cavity pressure, as well as the increased risk of perforation related to placing coils into this tiny, fragile aneurysm sac,7,8 surgical clipping is more suitable than endovascular treatment.9

In this study, the aim was to determine the treatment results of clipping surgery via lateral supraorbital approach for ruptured tiny aneurysms in terms of feasibility, efficacy, clinical outcomes, procedure-related risks, and safety.

Forty-four very small aneurysms (≤3mm), with difficult configurations in 38 patients, were treated using surgical clipping via lateral supraorbital approach from January 2013 to March 2018 in The Second Affiliated Hospital, Anhui Medical University. All the clinical data used in this study were obtained from the paper and electronic medical record (EMR) of the Hospital. The study protocol was approved by the Research Ethics Commission of The Second Affiliated Hospital of Anhui Medical University.

Ruptured tiny aneurysms (≤3mm) were the most important inclusion criteria. The indications for surgical operation included tiny aneurysms with subarachnoid hemorrhage (SAH). History of SAH confirmed by a head computed tomography (CT) examination, which showed the hemorrhage from the aneurysms.  Aneurysms larger than 3 mm, suspected pseudoaneurysms, and aneurysms associated with brain arteriovenous malformations were excluded from the study. According to the imaging performance, surgical treatment of the patients with ruptured tiny aneurysms was mainly based on the patient preference, age, morphology of aneurysm, and the relationship between the aneurysm and its parent vessel. Final decisions regarding the treatment of patients with tiny aneurysms were discussed among the faculty members. The related risks and complications of the operation were fully communicated to the family members, and they signed the consent of the operation.

Standard procedure of surgical clipping was performed.11,12 Lateral supraorbital craniotomy was made by placing a single burr-hole 2.5 cm posteriorly to the keyhole point, beneath the superior temporal line. The bone flap was detached mainly by side-cutting craniotome, but basal part was drilled before lifting the flap. The free bone flap was sized from 3 × 3 to 4 × 4 cm. Dura was opened in a curved fashion with its base toward the orbital rim and the sphenoid. After opening the Sylvian fissure minimally, it was filled with water injection technique and opened proceeding towards the aneurysm site. Sylvian fissure was dissected towards midline of the opening. The arachnoid and pia maters were gradually separated from the wall to expose the aneurysm. After confirmation of the aneurysm morphology, surgical clipping of the aneurysm was performed using a mini clip. For closure, the fixation of the bone flap with two Caniofix O,R was used.

The degree of occlusion was evaluated immediately post-procedure. Occlusion degree was evaluated according to the performance of postoperation CTA. According to the results of neurological examination and functional status of the patients at discharge, clinical outcome was evaluated by the Glasgow outcome scale (GOS) as follows: grade 1, deceased; grade 2, vegetative state (patient exhibits no obvious cortical function); grade 3, severely disabled (patient depends upon others for daily support due to mental or physical disability or both), grade 4, moderately disabled (patient is independent as far as daily life is concerned. The disabilities found include varying degrees of dysphasia, hemiparesis, or ataxia, as well as intellectual and memory deficits and personality changes), and grade 5, mildly disabled or not disabled (resumption of normal activities even though there may be minor neurological or psychological deficits). One month after discharge, patients come to the centre for a follow-up visit. All patients underwent further follow-up via telephone and hospital visits at 3, 6 and 12 months following the intervention. Patients underwent a follow‑up DSA at ~6 months after the intervention.

Thirty-eight patients underwent surgical treatment for ruptured small cerebral aneurysm. There were 14 males (36.84%) and 24 females (63.16%), aged 20 to 70 years.The average age was 54.90 ±9.38 years. The preoperative CTA, DSA, or MRA angiography showed that there were 44 aneurysms in 38 patients. All ruptured aneurysms in 38 patients appeared in anterior circulation; 50.00% of aneurysms (19/38) were located on middle cerebral artery, 26.32% of ruptured aneurysms (10/38) on anterior communicating artery, 15.79% of aneurysms (6/38) on posterior communicating artery, 5.26% of aneurysms (2/38) on anterior choroidal artery, and one aneurysm (1/38) on ophthalmic artery. Five (13.16%) patients had multiple aneurysms, among whom four cases (4/38) had two aneurysms, and one case (1/38) had three aneurysms. In five cases of multiple aneurysms, only one aneurysm ruptured. For an aneurysm without rupture, no surgical intervention was done as in two cases of basilar aneurysm. The average neck diameter of tiny aneurysms was 1.96 ±0.47 mm. 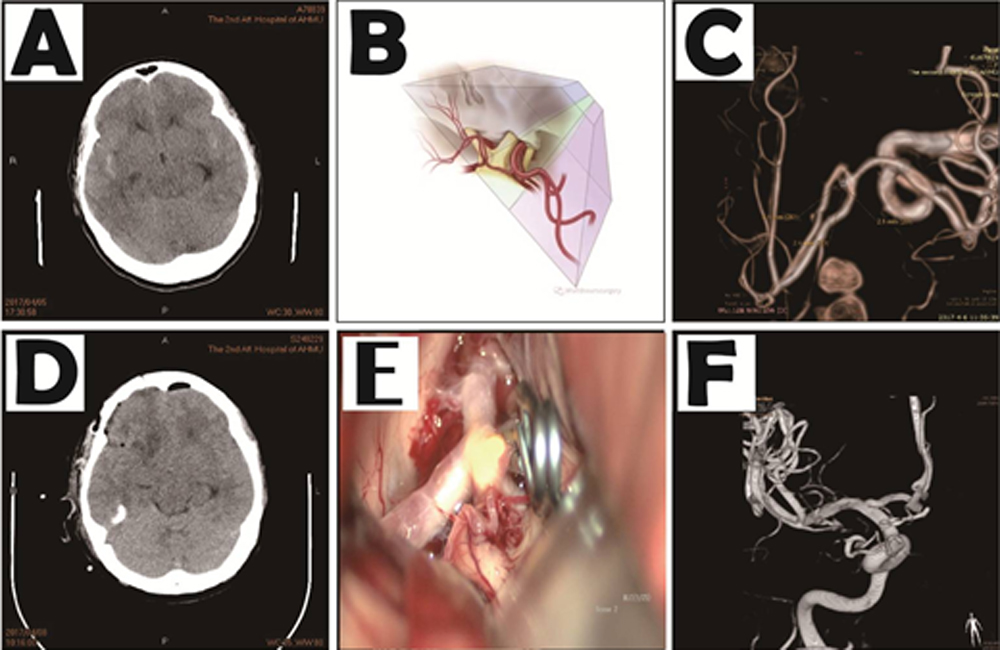 Figure 1: The representative case 1. (A) CT showed extensive subarachnoid hemorrhage at admission; (B) The schematic diagram of normal exposure range via the lateral supraorbital approach; (C) DSA angiography found a tiny aneurysm at anterior communicating artery on the second day after admission; (D) CT examination was obtained at post-operation; (E) The aneurysm had been clipped; (F) DSA angiography showed no recurrence and no residual at 3 months follow-up. 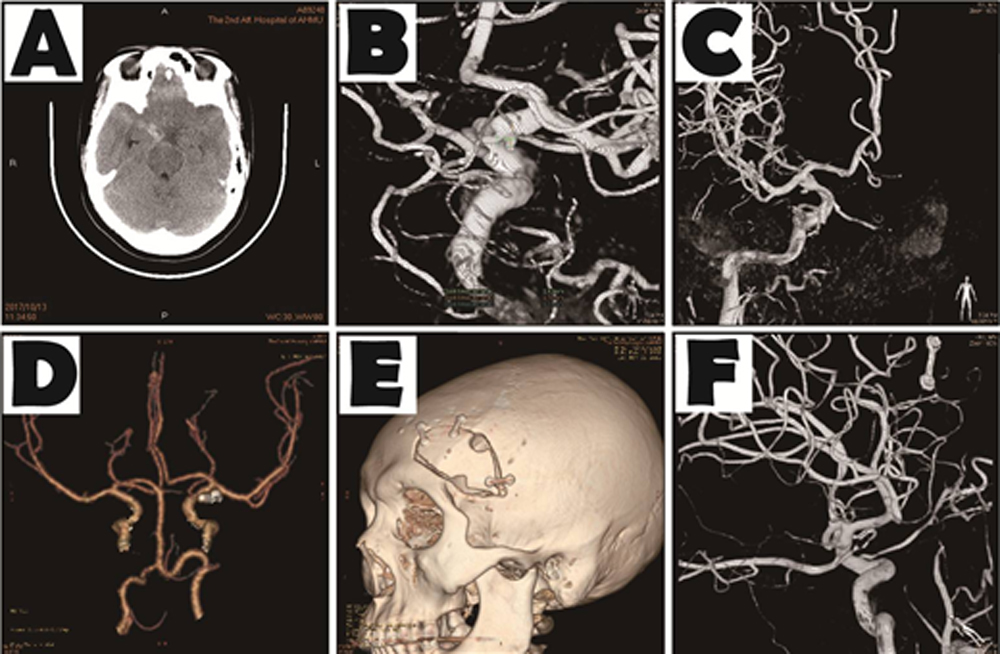 Figure 2: The representative case 2. (A) CT showed subarachnoid hemorrhage on suprasellar cistern at admission; (B,C) DSA angiography found a tiny aneurysm on the location of right posterior communicating artery on the 14 days after admission; (D) After operation CTA examination was performed; (E) CTA showed the range of bone window in the operation at the discharge; (F) DSA angiography showed no recurrence and no residual at 3 months post-operation.

Aneurysm clipping was successfully achieved in all the patients (100%). There were no surgery-related complications such as rebleeding, vasospasm, epilepsy, hydrocephalus. At the time of discharge, 86.84% of the patients (33/38) attained a favourable outcome (GOS score 4 or 5). Among them, 32 cases had GOS score of 5. Only 13.16% of patients (5/38) had poor clinical outcome (GOS score 1, 2, or 3). Among the latter, one patient (1/38) died (GOS score 1), and 3 patient (3/38) were a vegetative state (GOS score 2), and 1 patient (1/38) was severely disabled (GOS score 3). Overall, Hunt-Hess Grades III–V were associated with poor clinical outcome. At the time of discharge, no case of residual neck or recurrence were identified by CTA.

During the follow‑up, only 20 patients (52.63%) among 38 patients received a CTA examination. Complete aneurysm occlusion was observed in all patients, and neither recanalization nor rebleeding was reported, at an average neuroradiological follow-up spanning 4.2 months (Figures 1 and 2).

Due to this arterial wall, small ruptured aneurysms may be correlated with massive bleeding and rebleeding, and it may lead to the devastating consequences.15 Consequently, effective neurosurgical clipping is usually considered for those lesions. Recently, the endovascular treatment strategy has been greatly improved, and has become an alternative strategy in the management of tiny intracranial aneurysms.16 However, management strategies for ruptured aneurysms remain controversial as the safety of endovascular coiling is still in question, and surgical treatment is technically challenging. 16

The standard pterional approach is the gold standard in treating aneurysms of the anterior circulation during the following decades.17 However, this approach requires a large amount of drilling of the skull base, and removal of sphenoidanterior clinoid, possiblly resulting in many complications, including cerebrospinal fluid leakage, infection, neuromuscular injury.11,18 Recently, minimally invasive surgical approach such as the lateral supraorbital approach has been used in treating aneurysms of the anterior circulation.11,19,20 The lateral supraorbital approach was is a simpler and quicker method, and described by Hernesniemi.11 This approach may offer the following benefits, including smaller skin incisions and craniotomy flap with subsequent reduced blood loss, less brain exposure, shortened operative time, reduced risk of infection, reduced postoperative pain, and faster reco-very.11-12,13,18 Moreover, it is directed more subfrontally and anterior than the pterional approach.19 Using the lateral supraorbital approach for tiny aneurysms, the shape and direction of the aneurysm are observable and the cerebrospinal fluid can be released, allowing removal of blood clots from the subarachnoid space, which can effectively reduce cerebral edema and cognitive impairment.19 These advantages can greatly improve the long-term prognosis of patients.

In this study, the success rate of clipping was 100%, whereas 86.84% patients (33/38) attained a favorable outcome, which was sufficient to indicate the safety of the treatment. Surgical bleeding was the most important complication to consider during craniotomy. Using the lateral supraorbital approach to treat tiny aneurysms in our hospital, it was found that it was necessary to consider the association between aneurysms and the peripheral vessels and nerves based on preoperative imaging data, to better protect the peripheral vessels of the perforator. If CTA or MRI was unclear, and CTI indicated an aneurysm, an emergency DSA was required. Furthermore, it was found that placement of the head above the heart can reduce edema of the brain and aneurysm pressure, and steering of the head would avoid the field of vision of the bony side of the skull base and the zygomatic arch. Natural brain tissue collapse allowed by CSF release in lateral orbital surgery was useful for avoiding reduction of brain tissue traction. Even if there was aneurysm on the contralateral side during operation, it can also be dealt with wholly.

Aneurysm clips were selected according to the size, thickness and angle of the aneurysm neck, and the thickness of the parent artery wall. The mini and small aneurysm clips demonstrated high application value for tiny aneurysms. Temporary clipping could be used to close the proximal artery of aneurysms which ruptured during surgery, and the double suction tube was able to cope with the bleeding. If the location of the aneurysm was difficult to reach, endoscopy was used to determine whether any residue remained or whether a further clip was required. When there is tiny blood blister like aneurysm or parent artery tear cannot be clipped, the cotton piece can be used to wrap the artery and then clip with a cross vessel clip.

Preoperative factors, including aneurysm features, surgeon preferences and economic effectiveness, should be considered prior to deciding a surgical strategy for intracranial aneurysm. Aneurysm clipping via the lateral supraorbital approach for tiny aneurysms is demonstrated to be safe, effective and wider scope of application.

FUNDING:
This work was funded by the Natural Science Foundation of Anhui Higher Education Institutions of China (KJ2019A0259 and KJ2019A0940) and the Translational Medicine Research Foundation of Anhui (2017zhyx17). There were no funders involved in the study design, data analysis, manuscript preparation, or and publish the study findings.

PATIENTS’ CONSENT:
Informed consents were obtained from patients to publish the data.

AUTHORS’ CONTRIBUTION:
TJ: Collected the clinical data, and analysed data.
LY, YS, MC, JC: Performed analysis and interpretation for the data.
TJ, JC: Drafted the manuscript.
TJ, ZR: Designed and supervised the study, and modified the manuscript.
The final manuscript for publication is read and approved by all authors.