ABSTRACT
Objective: To assess the impact of emollient therapy on gain in weight and length among preterm and low birth weight babies.
Study Design: Randomised controlled trial.
Place and Duration of Study: Department of Pediatric Medicine, KEMU / Mayo Hospital Lahore, from January till June 2018.
Methodology: Infants with birth weight between 1.5 and 2.5 Kgs or preterm neonates born between 28 and 37 completed weeks of gestation were included in the study. Neonates with genetic syndrome, infection or with a history of admission in NICU due to any reason, were excluded. They were randomly divided into two groups-A and B, by lottery method. Mothers of the neonates in group A were advised massage with sunflower oil; while mothers of the neonates in group B were advised massage without any emollient. Babies were closely followed up and their weight and length were measured at two months of age and were analysed using SPSS version 23.0.
Results: For 140 neonates, the mean increase in weight was 489.84 ± 297.48 grams among group-A neonates (emollient therapy group) and it was 373.43 ± 276.31 grams among group-B neonates (p = 0.018). The mean increase in length was 6.5 ± 1.1 cm, among group-A neonates and 4.8 ± 1.3 cm in group-B neonates (p ˂0.001).
Conclusion: Massage with emollient therapy leads to significantly more increase in weight and length compared to massage alone, among preterm and low birth weight neonates. Emollient therapy is an effective non-pharmacological intervention for increasing weight and length in low birth weight and preterm neonates.

Prematurity is not just one of the common causes of morbidity and mortality in newborns, it also adds to the economic burden of around 15.5 billion dollars to costs of hospitals per year.1 For patients admitted in neonatal intensive care units, one of the important parameter for discharge is weight gain.2 Different practices have been devised to improve weight gain in preterm infants and one of them is massage therapy.3 In the Indian subcontinent, massage therapy has been in practice for hundreds of years. Oil massage provides a mechanical barrier, protecting against skin disruption that can lead to invasion by microorganisms; hence, reducing chances of acquiring nosocomial infections.4 It is also a rich source of essential fatty acids, like linoleic acid. Oil massage reduces water and heat loss through skin; thus, promoting growth by energy conservation.5

Historically, this practice was first introduced many centuries ago in China, sometime around 2nd century BC. Literature supports benefits of touch and massage therapy on the basis of evidence generated by multiple trials.6 A review suggests that besides weight gain, there are many other benefits of newborns massage in terms of improved sleep-wake patterns, neuro-developmental outcome, emotional bonding, and decreased rates of hospital acquired infections in low-birth-weight and preterm babies.7 Oil massage is supposed to be superior to simple touch therapy. Oil massage has combined benefits related to the oil application and tactile kinesthetic stimulation.8

According to one randomised trail, weight gain at 28 days among neonates in oil massage group was better compared to the control group (476.7 vs. 334.9 g, p <0.05).9 Similarly another study has reported that at 28 days, weight gain was better in the oil massage group compared to the control group (365.9 vs. 285 g) and increase in length was 3.7 ± 0.1 cm with oil message versus 2.4 ± 0.01cm with standard care. However, these results were statistically insignificant.10

After approval from the Hospital Ethical Committee, this trial was conducted at the Department of Pediatric Medicine, KEMU / Mayo Hospital, Lahore. Written informed consent was obtained from parents. A sample size of 140 neonates was calculated using 95% confidence interval and 80% power of test by using WHO calculator. Both breast-fed and non-breast fed infants with birth weight between 1.5 and 2.5 Kgs or preterm neonates born between 28 and 37 completed weeks of gestation were included in the study. Neonates with genetic syndrome, infection or with a history of admission in NICU due to any reason, were excluded.

Selected neonates were randomised into two groups; using lottery method, to reduce selection bias. In group-A, mothers were advised to massage their babies with sunflower oil at a dose of 10 mL/Kg/day, twice a day, in equally divided amounts. While, neonates in group-B were given massage for same duration without emollient. They were called for follow-up after 2 months of application of sunflower oil, and their weight and length was measured using digital weighing scale and infant length scale.  All the information was recorded and analysed using SPSS version 23.0. Quantitative variables like age, gestational age at birth, length and weight, were presented as mean and standard deviation. Qualitative variables, like gender, were presented as frequency and percentage. Chi-square test was applied on gender with groups A and B. Data was stratified for age, gender and type of feeding to deal with effect modifiers. Outcome variables were compared using independent t-test, taking p-value ≤0.05 as significant. In order to control the effect modifiers, stratification was carried out by applying ANOVA test. P-value <0.05 was taken as significant.

Massage can be done by neonate’s mother as well as a trained person. As documented in literature, moderate pressure massage improves velocity of weight gain in low birth weight infants by various mechanisms. A weight gain of 5.60g/day (95% CI 2.64–8.56, p <0.001) was observed with the use of moderate pressure massage.11 Vagal activity is increased, increased insulin secretion, energy expenditure is reduced, enhanced gastric motility, improved nutrients absorption and levels of norepinephrine and cortisol are decreased in serum by limiting stress behaviour of neonates.12 Massage therapy decreases post-partum depression and anxiety symptoms in mothers; and it has equivalent effectiveness when applied either by mothers or professionals.13

Trials on other types of oils have also been conducted, comparing different categories of oils. For instance, one study compared the use of sunflower seed oil and mustard oil, and it was found that sunflower seed oil has more efficacy in maintaining good skin barrier and preventing against infection.15 In another study, despite the improvement in skin condition, no statistically significant difference was found between the sunflower seed oil and control group in prevention against nosocomial sepsis.16 No study, however, in literature, shows the effect of sunflower seed oil in weight gain of infants. An RCT by Jabraielle et al. reports olive oil as being effective in neonates for the weight gain, as compared to the control group, in which massage was given without any oil. The average weight gain in oil massage group was 21 g/day; whereas, in the control group, it was 7g/day.17

In this study, there was not only a significant increase in weight, but also in the length of the infants, who were given massage therapy with sunflower oil. For this study, sunflower seed oil was specifically chosen for massage, to see its effect on growth of infants, because not much data is available in the literature regarding sunflower seed oil. In addition, majority of the previous studies were conducted to study the effect of oil massage on prevention against infection and sepsis, but not on growth parameters.

Although, in the present study, neonates admitted in NICU were excluded, but studies recommend use of oil massage in NICUs for preterm and low birth weight infants. Moreover, training of oil massage for mothers at home is necessary to stimulate mother-infant bonding and emotional attachment.18 It also helps in decreasing mother’s stress and enhancing her breast feeding self-efficacy.19

Table I: Comparison of the study variables between both groups of neonates (n=140).
Table II: Effect of the contributing factors on the mean increase in the weight and length of the neonates (n=140). 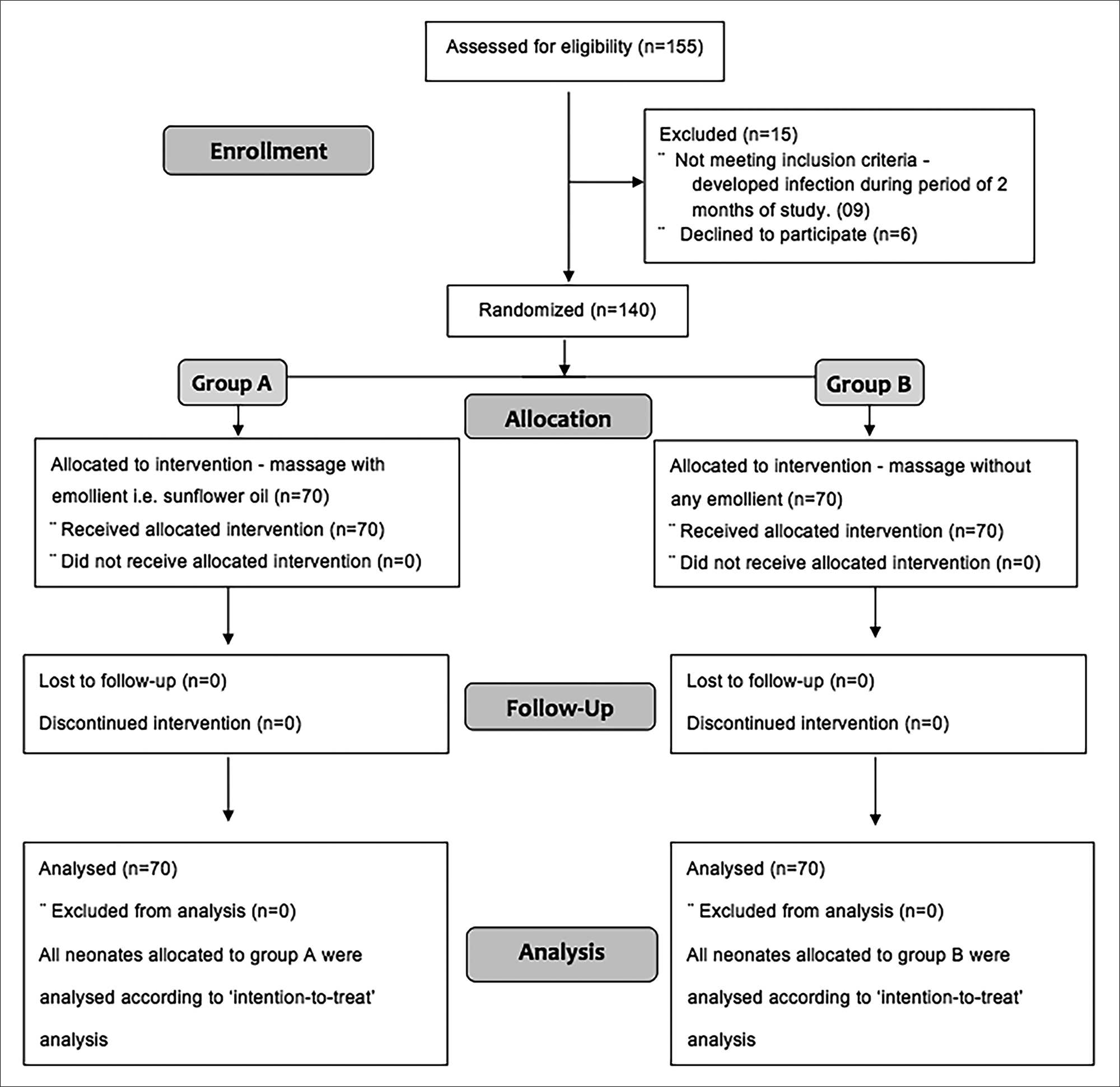 In the present study, all efforts were made to reduce the number of confounding factors. This included, factors such as excluding neonates with hospital admissions, due to any cause, or conditions that impair feeding in any way. Moreover, the emollient therapy, i.e. massage with sunflower oil was administered at home by the mother herself and not by any healthcare provider, unlike the many reference trials which is encouraging for the use of emollients massage in community settings.

As this study included a specific gestational age and weight in inclusion criteria, so the results cannot be generalised to gestational age <28 weeks and low birth weight babies <1.5 kilograms. Moreover, there should be more trials comparing effects of different emollients on growth parameters.

The results of this study suggest that the emollient therapy helps in better weight gain and increase in length among the preterm and low birth weight babies; and it can be used as an effective non-pharmacological therapy in middle- and low- income communities, in Pakistan.

DISCLOSURE:
This article is derived from the original dissertation by the first author, which was approved by CPSP for FCPS Paediatrics Part II examination.

ETHICAL APPROVAL:
Ethical approval was taken from Institutional Review Board of King Edward Medical University/Mayo Hospital, Lahore prior to initiation of research work.

PATIENTS’ CONSENT:
Informed consents were taken from the parents of all neonates, to publish the data concerning their cases.

AUTHORS' CONTRIBUTION:
AAJ: Principal investigator and a major contributor in data collection, analysis and interpretation, manuscript writing, and literature search.
MHH: Helped in drafting the work, revising it critically as a supervisor, and final approval of the version to be published.
TF, MN, AW: Assisted in data collection, analysis and literature search.