Supracondylar humerus fractures (SHF) are common elbow injuries that comprise of 16% of all pediatric fractures and two-thirds of all hospitalisations for pediatric elbow injuries.1,2 Ninety-eight percent of these cases are extension type injuries.3 The ideal treatment for children with Gartland Type III SHF is closed reduction and stable percutaneous fixation with Kirschner wires.3 The purpose of the traditional method is to adapt the distal fragment to the proximal fragment. Closed reduction may fail in a small number of cases (with a rate ranging between 3% and 46%). Insufficient reduction during fixation or loss of primary reduction may cause cubitus varus deformity or loss of elbow flexion.4

Considering the mechanism of these fracture, fracture formation is expected to occur in the area where the olecranon with hyperextension of the elbow, and the olecranon fossa where the humerus is narrowed is pressed on the thin cortical bone.5 Elbow joint anatomically include joint capsule, olecranon, coronoid fossa, and radial fossa. However, it does not include humeral epicondyles. Medial collateral ligament (MCL) sticks to medial epicondyle, while lateral collateral ligament (LCL) sticks to lateral epicondyle.6

Ligamentotaxis is the principle of molding fracture fragments into alignment as a result of tension applied across a fracture by the surrounding intact soft tissues. LCL and MCL have an important role in closed reduction of pediatric supracondylar humerus fractures by ligamentotaxis.7,8 The hypothesis was that for these fractures, one or both sides of the fracture line remaining below the epicondylar level will impair ligamentotaxis during closed reduction. In cases where the fracture level is localised in the distal of the epicondyles, an increase may be observed in open reduction rates or postoperative coronal/sagittal/axial deformity rates after reduction.

For these reasons, the aim of the study was to investigate the effect of localisation of the fracture line according to the designed trans-epicondylar line (TEL) on open reduction rates and postoperative reduction quality.

Files of 187 patients, operated due to pediatric SHF at Orthopedics and Traumatology Clinic of the Department of Orthopedic and Traumatology, Prof. Dr. Cemil Taşcıoğlu City Hospital, İstanbul, Turkey, from January 2011 to December 2018, were examined retrospectively. Ninety-one pediatric cases who underwent surgery with close SHF having extension deformity of either gender presenting within 24 hours of injury, were included in the study. Patients whose surgical intervention time exceeded 24 hours, open fractures, flexion type fractures, Gartland type 1 and type 2 fractures, type T fractures, fractures with neurovascular deficit, multiple part fractures, pathological fracturs, patients with additional injuries and patients under the age of three year, were not included in the study since they would affect radiographic assessments.

Surgical decisions of the patients were made by the senior attending physician responsible from the emergency cases of that day, and they were operated by the same surgeon. All cases were operated under general anesthesia and in supine position. At first, closed reduction was applied to each case, and open reduction was applied in cases where sufficient reduction could not be achieved. In cases with closed reduction application, reduction was achieved under fluoroscopy; afterwards, percutaneous fixation was achieved with Kircshner wires (K-wires) according to the surgeon’s preference. While a person ensures the continuity of the reduction, the pin was applied from the medial and/or lateral condylar sides by the surgeon. When the medial pin was applied, K-wire was inserted with a mini open surgery.

Unless the desired reduction could be achieved after 3 to 5 closed reduction attempts, open reduction was done. In cases where open reduction was done, one of the single lateral, single medial, lateral + medial double incision or posterior incision methods was used according to the surgeon’s choice. Subsequently, percutaneous fixation was achieved with K-wires, according to the surgeon’s preference. In all cases, the proximal part of the wires was left out of the skin in order to avoid a second anesthesia application.

After surgery, a long arm splint cast was applied to each patient. If postoperative roentgenograms were normal, finger exercises were explained to the patients and their discharge was planned after swelling follow-up for 24 hours. After three weeks, they were called to the first outpatient clinic, direct radiographies were scanned, the splints were removed, and passive ROM exercises were allowed. Afterwards, 10 days of follow-up was ensured with outpatient clinic, and K-wires of cases with union findings upon radiological and physical examination were removed under outpatient clinic conditions. Deformity measurements were made on roentgenograms taken one month after the removal of K-wires.

The angle between lateral humeral condylar physis and humerus shaft was measured for Baumann angle.9 A range between 45o and 57o was accepted normal for lateral capito-humeral angle.10 As stated by Singh et al., thickness difference between both cortexes of proximal and distal fragments in anteroposterior and lateral elbow radiographies were assessed as rotations, and measured in milimeters. According to the rotation in the coronal plane of the distal piece measured in millimeters, the degree of the accepted rotation was grouped under three categories. Values between 0-2 mm were assessed as good, values between 3-5 mm were moderate, and values exceeding 5 mm were considered bad.11

TEL was drawn with the line connecting middle points of lateral and medial epicondyles in AP radiographies. If there is no epicondylar ossification centre, the TEL was determined in a way to connect the most medial and lateral bone points adjacent to the epicondyle as performed by Bloom et al. (Figure 2).14

Measures of the fracture line according to TEL were made from preoperative roentgenograms. Preoperative and postoperative radiographic measures were taken by imaging software used in the hospital named INFINITT PACS (Picture Archiving and Communication Systems) version 3.0.11.4 (BN13). Averages were taken after the measurements were taken by the only surgeon, who did not perform the operations. Numerical values, identified based on these measures, were used in statistical calculations as data. Surgeries were performed by ten different senior surgeons. All of the surgeons had over five years of experience in trauma surgery field.

Statistical analyses were performed with SPSS version 25.0 software. The descriptive analyses were presented using mean, standard deviation, median and interquartile range (IQR) values. The compliance of the variables with normal distribution was examined with histogram/graphs and the Kolmogorov-Smirnov test. The independent group t-test was used when evaluating the normally distributed (parametric) variables between the groups. 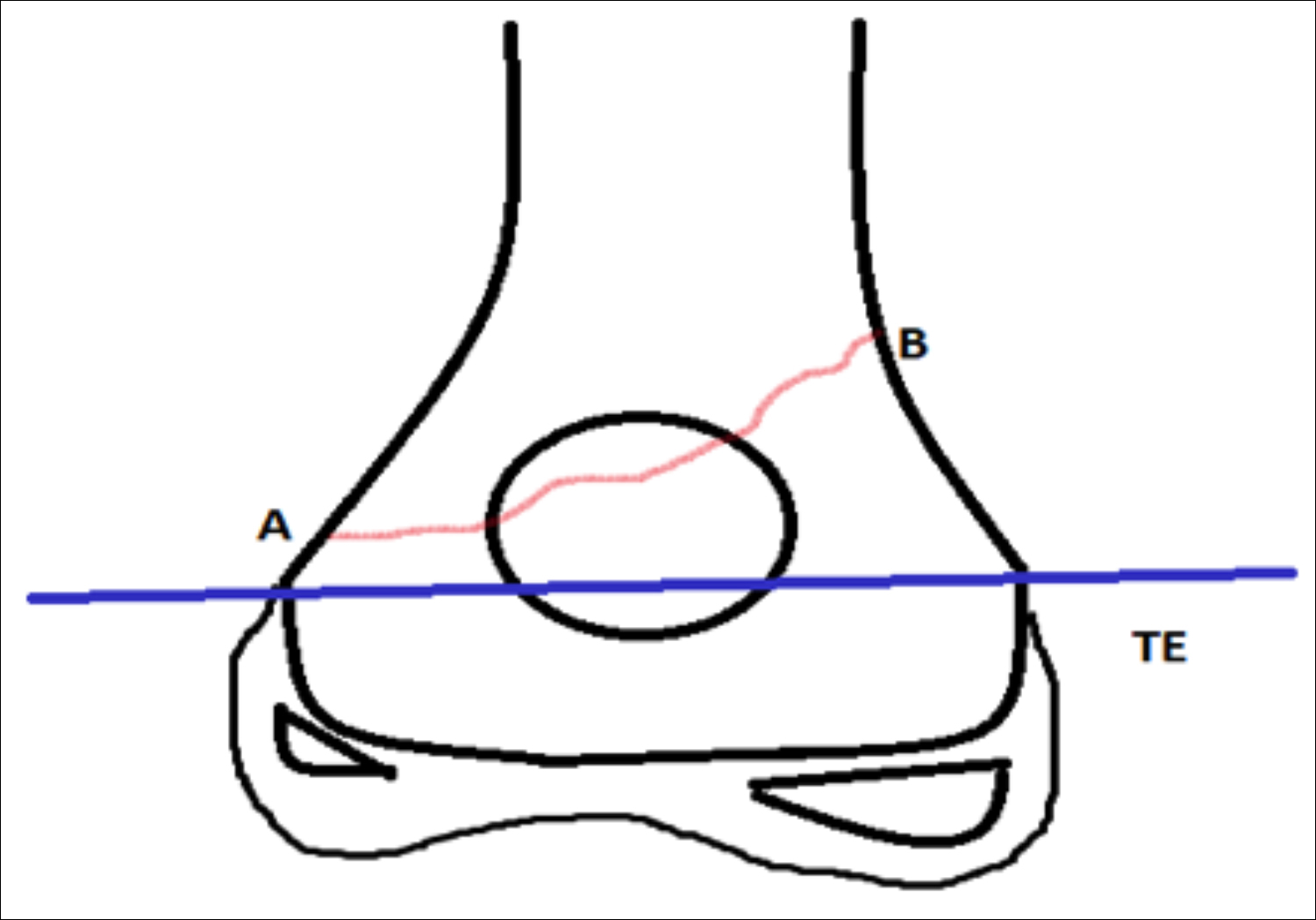 Figure 1: In AP radiography, the line connecting both epicondyles is determined as trans-epicondylar line. It was assessed as top, if both fracture line ends (A and B) are on this line, and as bottom if one or both are on the level below.

Cases were operated by 10 different surgeons. No significance was present between surgeons in terms of sagittal deformities (p=0.501). On the other hand, there was statistical significance present between surgeons in terms of surgery type (p=0.019), presence of postoperative rotation (p=0.007), coronal deformities (p=0.038), and surgery durations (p=0.021, Table II).

Singh et al. has reported that post-reduction rotation constitutes more importance in orthopedic elbow fractures; however, it has very little effect on function.11 Aiyer et al. have suggested that it causes very little deformation since the rotation is compensated by shoulder joint.20 In this study, rotation rates were higher in cases where the fracture line passed below the TEL; the ligamentotaxis provided by the position of the forearm during pin fixation constitutes importance in the continuance of distal fragment reduction even if open reduction is performed in supracondylar fractures. The increase in rotation frequency in cases where the fracture line is below the TEL, may depend on this condition.

It is not important to accurately localise the fracture surfaces in pediatric age group. This has little effect on final range of motion and carrying angle. The final remodelisation tolerates many faults.21 However, rotation deformities are not expected to be corrected with remodelisation.22 The rotation observed after reduction causes medial angulation. Although rotation alone does not cause cubitus varus, it may cause misalignment of varus.11,23

In cases where the fracture line is lower than the TEL, Baumann angles also had higher values besides rotation. This may be the result of the rotation causing medial angulation. On the other hand, the authors believe that the rotation must be corrected anatomically during the reduction of pediatric fractures, since the remodeling of the rotation does not recover. Because functional or cosmetic problems, which occur as a result of this rotation, will also bring postoperative dissatisfaction and additional surgical interventions. Determining the localisation of the fracture line, according to the trans-epicondylar line, may allow the surgeon to predict during the preoperative period and provide warnings to be more cautious during surgery.

Personal characteristics of the surgeon are effective on postoperative malalignment rates in surgeries of SHF.17-19 There was a relation between rotation rates and surgeons in this study. In this case, it would not be sufficient to predict the rotation possibility by determining the fracture line, according to TEL only. From another perspective, if postoperative rotation rates are affected from the surgery, it would cause the surgeon to be cautious during the surgery, if he/she is aware of this possibility in the preoperative period. This may even cause a decrease in rotation rates depending on the surgeon.

Limitations of this study are retrospective, multiple surgeons performing the surgery, and it does not provide information on functional and cosmetic results. Other limitation is the lack of knowledge about bone alignment of the numerical values, measured in the long run, and ranges of motion of the elbow.

Determination of localisation of fracture line, according to trans-epicondylar level in preoperative roentgenograms, may allow the surgeon to predict the possibility of postoperative rotation deformity. This can provide warnings for the surgeon to be more cautious during the operation.